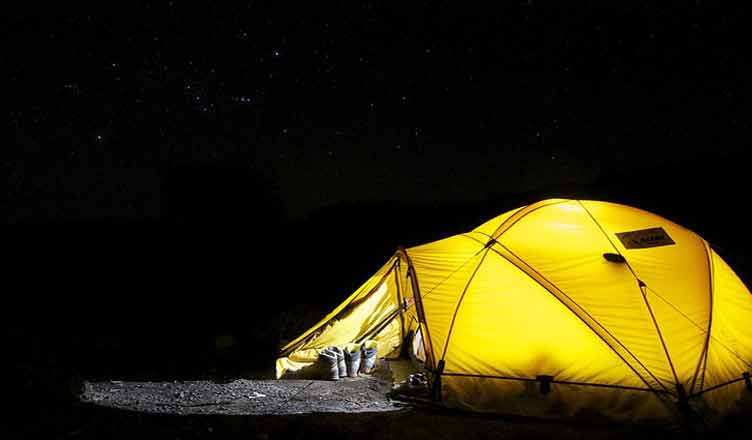 After a day long trek we set up camp close to the babbling brook; as darkness descended and a chill settled we lit a fire with a pile of woods placed there by the earlier campers. Those withered and dry logs slowly released years and years of stored energy, acquired from the sun, the wind and the earth. Out came bright lights, whispering hisses, sizzling pops and a thick intoxicating smell of smoke and pine.

Suffused in the shifting chiaroscuro of the fire, our bodies felt warm and relaxed; before long we started to doze off when the shill and plaintive cry of the capybara rent the night sky, jerking us into a state of alertness, hastening the girls to the safety of the tents.

Fred and I stood up to stroll in the moonlit night to chase away the rodent so we could convince Aaliyah and her friend to step out from their hideout.

We got into a conversation as we kept trudging into the depths of the forest. Fred always felt he was too old to ascend the mountain with us but this was the second time he had beaten his confining beliefs. He was grateful to his friends for not letting his soul be recognized by his age.

We walked past the corpulent thicket not realizing that we had walked far from the camp site. We decided to retreat but realized we had lost our way in the labyrinth. Fred was breathing heavy, I was getting worried.

All of a sudden Fred took charge of the situation. It was redolent of his wartime days. Fred is a Vietnamese war veteran and he used his skills of sensing and mapping to trace the path which leads to the camp.

I realized how mindful and present he was in the now. I followed him and was amazed at the calm demeanor of my couth friend in the dire situation. We roamed around for what seemed like hours before we heard muffled voices and saw smoke rising from behind the bushes. We had found our way back.

We rushed to check on the girls. They were sitting unfettered by the fire smiling at us. Aaliyah walked up to me and gave me a tight hug and recounted the way she and her friend had chased away the rodent. All of us laughed heartily.

I was in awe at the turn of events and how leadership emerged in each one of us when faced with a challenging situation. I realized one vital aspect of human behavior is to adapt. Change can bewilder us momentarily; we may want to drift away but if we give it some time it will settle and we will witness governance rising from within our timid selves.

Let limitations never define who you are.

The Moment Of Transformation Is Here!
Next

The Sun-Kissed Leaves In Between The Pages!