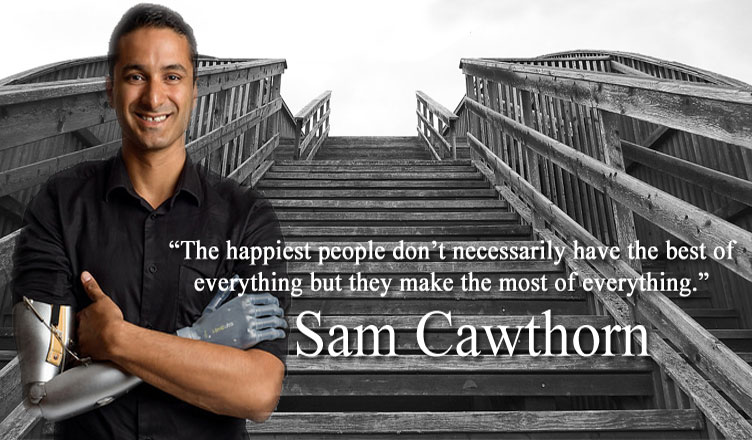 “When written in Chinese, the word ‘crisis’ is composed of two characters. One represents danger and the other represents opportunity.” John F. Kennedy

So where does this ‘I-wish-I-had’ belief take you to? Have you noticed the aftertaste of this magical thinking is often sour? It proves your lack of trust upon yourself.

There was a time when I was about to give up on myself thinking about the never-ending list of ‘ifs’ and ‘buts’ that I had accumulated because of constantly nurturing the feeling of deficiency. I had reached a dead-end when I met someone who transformed my perspective. From ‘I-wish-I-had’ I moved on to ‘I-am-glad-I-have’. Meagerness changed to gratefulness. I started believing in possibilities.

Sam Cawthorn’s voice had alacrity and I immediately felt enthused. His achievements are so extensive and yet the humbleness and modesty touched me deeply. He is a motivational thought leader and has impacted many lives with his positive approach towards life. He believes in the power of love and cherishes his wife and three beautiful children. He lives in a beautiful house in Sydney Harbour  and has lately won an Edupreneur Award for his initiative of starting a speaker’s institute in Australia.

Less than a decade ago Sam, 26 years old, a young guitarist and hip hop dancer and coach, a promising industry adviser, lied in the middle of the road stuck in a smashed car with crumbled leg and arm watching people around him who were looking at him as though he will not be able to make it. He slipped into coma and was declared dead by the paramedics for three minutes. His right hand was amputated and his right leg became dysfunctional. His world came crumbling down in one cataclysmic moment.

Besides struggling with his physical limitations his woes ballooned when he lost his 21 years old younger brother to cancer. He suffered severe pain and grief. His blueprint had gone. He states this moment of drifting in an inky darkness as the Kairos moment –the point of complete transformation. When you never bounce back to what you were but bounce forward to a newer and brighter reality.

In his book, Bounce Forward, he writes, “Pain is inevitable; it is part of being alive.  But misery is optional.  I knew I had a choice.  I could give up, listen to the doctors who told me I’d never walk again, and wallow in misery and bitterness.  Or I could accept that things had changed and use the crises to reinvent myself and get better.  I chose the latter.”

Sam smiles radiantly and his eyes penetrate your soul and he asks us to take stock of our wishes and make it a reality instead of getting disillusioned in the maze of ‘perhaps’. He says, “What stops you?” He still plays the guitar with the help of a special plectrum that attaches to his bionic arm. He travels the world. He lives, learns and loves with passion.

He emphasizes on the importance of gratefulness, he says melancholy cannot exist if you are grateful. Universe clothes the lilies and takes care of the little birds’ meals, it opens its heart for you to dive in but you fail to see it with your limited sight.

The problem is people start living for goals, rather than dreams. They give prominence to stability over visions. The law of nature is change. Live for your dreams and love for the sake of love. Don’t sit and stare at the gold scattered through the rift in the clouds but get up and chase the sun.

It’s Positive Thinking Day! Make a resolve to live a life of possibilities and opportunities.

Keep On Keeping On!
Next

Never Let The Limitations Define Who You Are!